A Sunday with Del Shores 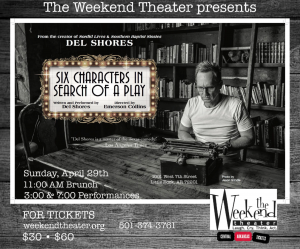 The Weekend Theater will host a brunch and two showings of playwright and filmmaker Del Shores’ new one-man show – Six Characters in Search of
A Play – on Sunday, April 29.
The brunch will be from 11 a.m. -1 p.m. at 610 Center Bar & Grill in downtown Little Rock. Attendees will enjoy a brunch buffet, drinks, and hear about The Weekend Theater’s 2018-19 season line-up. Del Shores will be a featured guest at the brunch and will later perform his one-man play Six Characters in Search of a Play at 3 p.m. and again at 7 p.m. at The Weekend Theater, at 7th and Chester streets in downtown Little Rock.
During the 90-minute play, Shores brings to life six one-of-a-kind characters he has met in real life that haven’t quite made it into one of his plays, films or TV shows.
Tickets cost $60 for brunch and play; $35 for brunch only; and $30 for show only.