The Weekend Theater, located at 1001 W. 7th Street, on the corner of Chester Street, in downtown Little Rock, AR, will hold auditions for the first two musicals of the 2015-2016 Season…   The Addams Family: A New Musical and Green Day’s rock-opera American Idiot. The auditions will be at 10AM on Saturday, March 28th and 6PM Sunday, March 29th at The Weekend Theater. One need only attend one of these times. Auditioners should come prepared to sing a verse and chorus only of a song of their choice. Bring sheet music; an accompanist will be provided.  Then there will be readings from the scripts.  The scripts will not be available before auditions.  Auditions may include movement as well.  Non-traditional casting is our expectation; where no specific race or ethnicity is specified or required, the roles are open to be played by anyone. 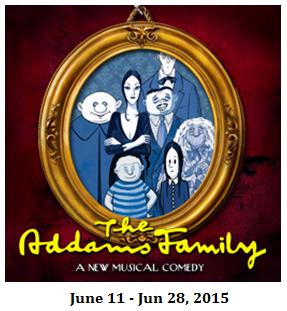 Two families with vastly divergent cultures, mores, and expectations collide in TWT’s 23rd Season opening production, The Addams Family: A New Musical. In The Addams Family we follow Wednesday Addams, the ultimate princess of darkness, who has grown up and fallen in love with a sweet, smart young man from a respectable family — a fact she’s kept secret from her eccentric parents. And if that weren’t upsetting enough, Wednesday confides in her father and begs him not to tell her mother. Now, Gomez Addams must do something he’s never done before — keep a secret from his beloved wife, Morticia. Trust and fear, love and truth, acceptance and forgiveness are just a few things on the menu on the fateful night the Addams host a dinner for Wednesday’s “normal” boyfriend and his parents. This magnificently macabre new musical comedy is created by Jersey Boys authors, Marshall Brickman & Rick Elice, and Drama Desk Award winner, Andrew Lippa (The Wild Party). 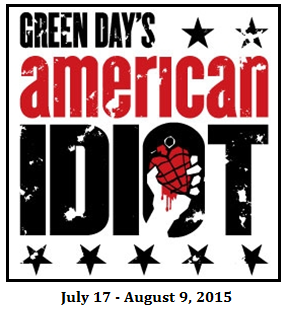 Next up is the two-time Tony Award-winning hit musical American Idiot, based on Green Day’s Grammy Award-winning multi-platinum album. This energy-fueled rock opera, which includes every song from the album, as well as several songs from follow-up release, 21st Century Breakdown, brings us face-to-face with the perils of war, drug addiction, and escapism, and the power of true friendship. The story centers on Will, Johnny, and Tunny, who struggle to find meaning in a post-9/11 world. When the three disgruntled young men flee the constraints of their hometown for the thrills of city life, their paths are quickly estranged when Tunny enters the armed forces, Michael is called back home to attend familial responsibilities, and Johnny’s attention becomes divided by a seductive love interest and a hazardous new friendship. We follow the three as they try to find themselves and learn that, with acceptance, comes the possibility of hope. Contains adult language and situations.

EXTRAORDINARY GIRL A girl in the Middle East who appears as a sexual hallucination to injured Tunny. Attractive and mysterious, she later appears as his nurse and accompanies him home after the war. Female, 20-35 yrs old

HEATHER A girl in Suburbia and Will’s girlfriend. She discovers she is pregnant but has difficulty telling her boyfriend the news. Once she settles down with him, she struggles to maintain their relationship with his despondency and eventually leaves him.    Female, 20-30 yrs old

JOHNNY The self-proclaimed “Jesus of Suburbia.” Bored of his do-nothing, go-nowhere existence, he takes off for the city to get a new lease on life. He wages an inner war between a budding love for Whatsername and growing dependency on St. Jimmy and drugs.    Male, 20-30 yrs old

ST. JIMMY Johnny’s alter ego. Known as the “city badass.” An enigmatic and charismatic enabler who gets Johnny addicted to drugs and grows jealous of his relationship with Whatsername.    Male, 30-40 yrs old

TUNNY Johnny’s friend who follows him to the city and eventually enlists in the army. He travels to the Middle East. A dreamer who is easily swayed, first by Johnny’s ideas and then by patriotism and the American Dream.    Male, 20-30 yrs old

WHATSERNAME A girl in the city who falls for Johnny. A rebellious activist who is willing to follow Johnny to the ends of the earth, but fights to have him embrace their authentic relationship rather than pursue his addiction.     Female, 20-30 yrs old

WILL Johnny’s friend. He ends up staying in Suburbia to take care of pregnant girlfriend Heather. The more he stays on the couch, the more he becomes slowly disconnected from the world and his own relationships.     Male, 20-30 yrs old

1. 16 bars of a song from the show or in a similar style, with sheet music.
* A pianist will be present to accompany you as you sing.
* If you don’t have a song to bring, just sing happy birthday for us! You do not have to be a practiced singer to audition.

2. TWT Audition Form Shows 1-2 2015-16 Season — Please print and fill out the form before you arrive. Copies will also be available at auditions.

4. Auditions for musicals can last up to 4 hours, so please bring lots of time, patience and energy with you, too!

All shows will perform on Friday and Saturday nights at 7:30pm and Sundays at 2:30pm. It is possible that Thursday night performances will be added. There will be mandatory brush-up rehearsals on the Thursday before the second and third weekend performances. If you cannot attend all dress rehearsals, brush-ups, and performances, please respect your fellow actors and tell us, though you are still welcome to audition; it is always good to practice!

If you have any questions, please feel free to email the directors:

We are a theater which features plays of social significance, and we strive to treat each other and ourselves with kindness, empathy and respect. Auditioning with us is designed to be a sharing and learning experience, not a competitively brutal trauma, so please come join our Weekend Theater family!