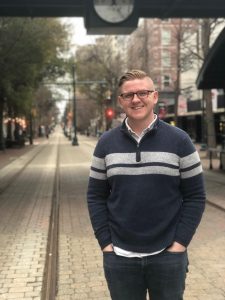 We are thrilled to welcome Zachery Ingersoll as our Assistant Artistic Director. He will be assisting Duane Jackson, our Artistic Director, with managing and administrating artistic operations.

Zach is a senior theatre major at UA Little Rock, is no stranger to TWT where he has worked on stage and behind the scenes.

He acted in “Standing in Ceremony: The Gay Marriage Plays”, which Duane Jackson directed, and he also assistant directed and served as technical director for “Rocky Horror,” directed by Andrea McDaniel, our executive director.

This summer, he will stage manage the musical “Bare,” and he will direct “The Survivor” in May, which also serves as his senior capstone project before graduating.

“Being given the opportunity to serve as the assistant artistic director at The Weekend Theater allows me to get valuable experience in managing and administrating the seasonal and artistic operations of a non-profit theatre company,” Ingersoll said.

In March, Ingersoll directed Chekhov’s “The Seagull” with the Little Rock Theatre Guild on the UA Little Rock campus. Ingersoll also worked at The Rep – as a directing intern last year under then-artistic director John Miller-Stephany on “The Heart is a Lonely Hunter” and as assistant director to Gilbert McCauley for “The Call” in January this year.

After he graduates in Spring 2019, Ingersoll plans to work as a freelance theatre director. He also plans to pursue a Master of Fine Arts in Directing and eventually work as a professor of theatre and directing.

“A dream of mine has always been to be a part of founding a theatre company with a strong educational mission and a commitment to producing new work and reimagining classics,” he said.