This post-Civil War era play depicts the migration of African-Americans, from the rural South to the urban North, as they meet in a 1911 Pittsburgh boardinghouse. “Joe Turner’s Come and Gone,” by the author of The Piano Lesson, Seven Guitars and Fences, is an installment in the author’s series chronicling black life in each decade of this century. 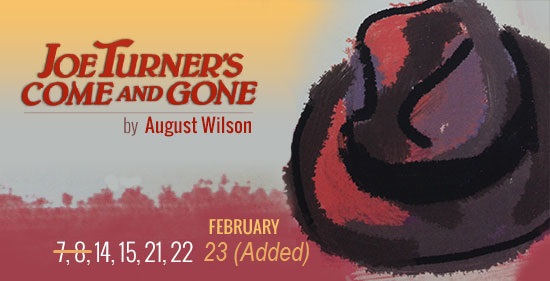 Even though Joe Turner himself is less a literal character than a symbol of the Southern, racist white man, he is based on a real person. As read in “The Past as Present in the Drama of August Wilson” by Harry Justin Elam:

Wilson’s title Joe Turner’s Come and Gone is appropriated from the blues song written by W. C. Handy, “the father of the blues,” and reflects a particular history and reality for African Americans. From Handy’s account, black women sang this lament after their men were taken into servitude by Joe Tourney, the brother of Pete Tourney, the governor of Tennessee (1883 – 97). “He come with forty links of chain, Oh Lady! Got my man and gone.”

And from W.C. Handy’s own, “Father of the Blues: an Autobiography”:

“It goes back to Joe Turney (also called Turner), brother of Pete Turney, one-time governor of Tennessee. Joe had the responsibility of taking Negro prisoners from Memphis to the penitentiary at Nashville. Sometimes he took them to the “farms” along the Mississippi. Their crimes when indeed there were any crimes, were usually very minor, the object of the arrests being to provide needed labor for spots along the river. As usual, the method was to set a stool-pigeon where he could start a game of craps. The bones would roll blissfully till the required number of laborers had been drawn into the circle. At that point the law would fall upon the poor devils, arrest as many as were needed for work, try them for gambling in a kangaroo court and then turn the culprits over to Joe Turney. That night, perhaps, there would be weeping and wailing among the dusky belles. If one of them chanced to ask a neighbor what had become of the sweet good man, she was likely to receive the pat reply, ‘They tell me JoeTurner’s come and gone.'”

Under the direction of Lloyd Richards, Joe Turner’s Come and Gone originally premiered on Broadway, March 18, 1988 at the Ethel Barrymore Theatre, running for 105 performances, and the production earned Tony Award for L. Scott Caldwell, and Tony nominations for Best Play, Best Director, and Best Featured Actor. And the 2009 revival, led by Tony Award-winning director Bartlett Sher, was honored by being the first Broadway production to be attended by President and First Lady Barack and Michelle Obama.

The play uses realistic language and dialogue representative of the day, with each denizen of the boardinghouse owning a specific rhythm and speech pattern and carrying a different relationship to a past of slavery as well as to an urban present. The characters include the proprietors, an eccentric clairvoyant with a penchant for old country voodoo, a young homeboy up from the South and a mysterious stranger who is searching for his wife. The Weekend Theater production cast includes seasoned alums, as well is newcomers to the stage.

There will be a brief talk-back with the cast after each Saturday performance.

This plays contains some simulated violence and adult language.